In this chapter we will take a look at a more general type of random game.

Definition of a stochastic game

A stochastic game is defined by:

We will make some simplifying assumptions in this course:

Definition of a Markov strategy

A strategy is call a Markov strategy if the behaviour dictated is not time dependent.

We have the stage game corresponding to state \(x\):

A concise way of representing all this is shown. 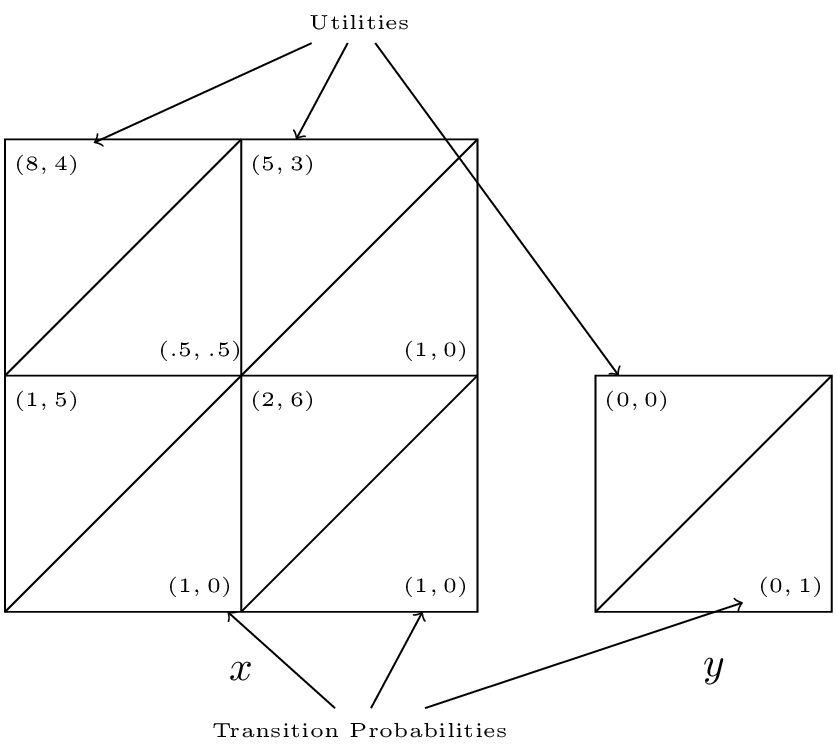 We see that the Nash equilibrium for the stage game corresponding to \(x\) is \((a, c)\) however as soon as the players play that strategy profile they will potentially go to state \(y\) which is an absorbing state at which players gain no further utility.

To calculate utilities for players in infinite horizon stochastic games we use a discount rate. Thus without loss of generality if the game is in state \(x\) and we assume that both players are playing \(\sigma^*_i\) then player 1 would be attempting to maximise future payoffs:

where \(U_1^*\) denotes the expected utility to player 1 when both players are playing the Nash strategy profile.

Solving these equations is not straightforward. We will take a look at one approach by solving the example we have above.

Let us find a Nash equilibrium for the game considered above with \(\delta=2/3\).

We consider each strategy pair and state the condition for Nash equilibrium:

Now consider the implications of each of those profiles being an equilibrium: